I travel for work A LOT. The production company I produce for has an office in Manhattan so I’m in and out of NYC pretty regularly. However, I’m always working so it’s all work and no play. However when I scored an amazing flight deal to Iceland out of NYC I took advantage of being able to work from Manhattan and decided to treat myself to a mini pre-vacation in the Big Apple.

How I got there:

Flying in to Newark the most economical way to get to Manhattan is the Newark Airport Shuttle. You can book one way or round trip for just $30, a taxi or Uber depending on the time of day could cost double or triple that.

I LOVE this little hotel. For it’s location it was very reasonably priced. I cashed in some of my hotels.com  rewards and managed to snag a room for less then $100 a night. If you’re looking for an amazing park avenue suite, bell boy and in room jacuzzi. This is NOT the hotel for you. The rooms are super tiny, but very clean and modern. I loved that each bunk bed had it’s own little TV. It was exactly what I need to rest after a busy day in the city. Plus there’s an amazing Mexican bar/restaurant downstairs. 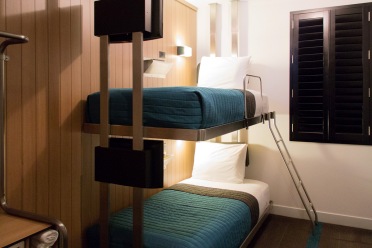 After checking in the hotel I headed down stairs to Salvation Taco . Which is a cool cantina attached to the hotel. I had TWO spicy margaritas and some delicious tacos before tipsy strolling to the subway to get to my broadway shot at 8pm.

By the way, being tipsy in Time Square is AMAZING. However being tipsy at the start of your favorite broadway musical is a recipe for an unnecessary amount of tears during the opening number. 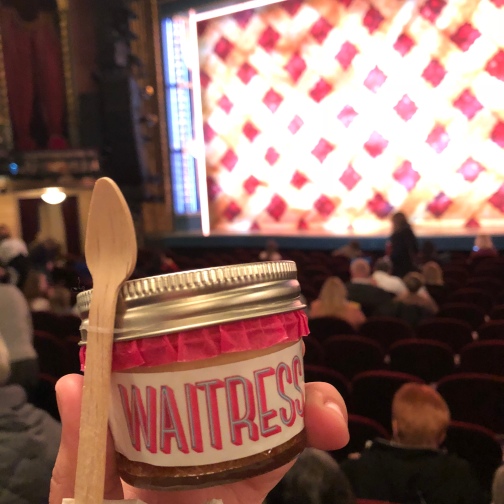 I’ve been singing the Waitress soundtrack non-stop for the past six months. So when I had a free night in NYC I had to go and  get front row seats. The perk of seeing a show solo is that tickets are so much cheaper. Instead of getting my front row isle seats for double the cost, one ticket was only $175 (instead of two for $250). Another bonus of “Treat-yo-self” to broadway solo is you can do whatever the F*!k you want. I got there early, had a drink at the bar and bought myself a key lime pie. It was magical. I laughed, cried and hummed along. PLUS Jason Mraz was headlining that night! Which was an unexpected surprise.

The next morning I joined the hoards of commuters on the subway and begrudgingly went to work. After a few ours of office work (AKA chatting with my best co-worker friend) I decided to head out to the city to shoot some “B-roll” footage (AKA explore).

Of all the time I’ve spent in the city I’ve never been to Ellis island or the Statue of Liberty! So that was the days mission.

First stop Battery Park. I HATE HATE HATE talking to ticketing agents. So I’d did the millennial introvert route, bought my ferry tickets online. Roughly $30 for Ellis Island and the Statue of Liberty.

I’ve always loved “coming to America” books and movies. So I was super interested in visiting Ellis Island and its museum. There’s so much to see at Ellis Island you probably could spend a whole day there. But I only had a hour to kill so I sped through each exhibit. The Island has so much history, historical impact and culture attached to it that the stories are never ending. I loved hearing and seeing how immigrants passed through customs and the trials they faced.

After speeding through I grabbed a hotdog and re-boarded the ferry back to Manhattan.

In total my round trip took about 3 hours, but I really feel like I saw everything. Plus I got my Instagram’s and that’s what matters most right? 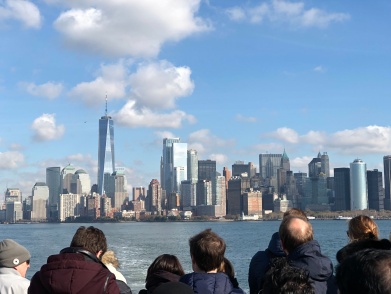 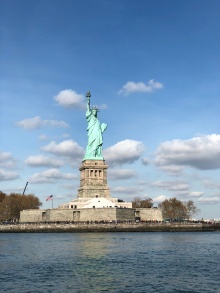 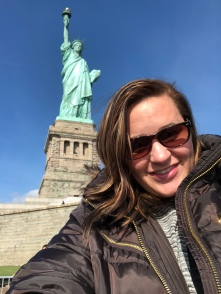 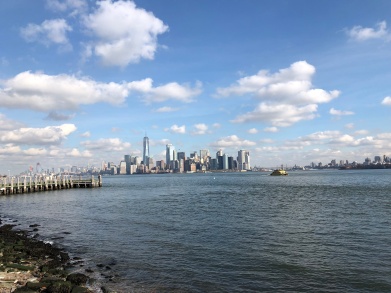 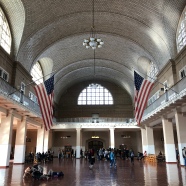 Fearing I’d miss my bus back to Newark I basically sprinted back to my office to collect my suitcase and get to the bus stop. As predicted the Newark Airport Express was exactly on time and I made it by an inch. I squeezed in my bus seat next to a very loud Indian couple and settled in for the 45 min ride back to Newark Airport. Next stop, Iceland!