Tonight in Sorrento we celebrated New Years with drinks and dancing.

I was upset when everyone in my group decided to leave at 115AM even though our local guide told us Italy didn’t come alive until 2AM! I tried to convince a bunch of people stay but they wouldn’t listen. So I started walking back to the coach with them. As I walked back to the coach I started to get really sad. I really wanted to stay out and keep partying with the locals. But instead I was folding to peer pressure and going back to the hotel. Then I begun to cry a little. That when I turned around. I decided I would rather stay out by myself then go back to the hotel. I realized I don’t need other people to have a good time. I don’t need a safety blanket.

So I rushed back to the main square and continued dancing with my new Argentinean friends. I walked around the town for a bit. I loved people watching and interacting with the locals. The Italians were all dressed to the nines and the young people were so beautiful. The town was lit up with sprakling lights and fire works went off throughout the night.

Around 3AM I decided it was time to go home. But then I realized I lost the paper with my hotel’s address on it. I asked a taxi if he could take me to “Sister’s Hostel”. He had never heard of it. We googled it…nothing. He called his friend…nothing. With no other options I ask if he could drive me around and I’d pay him for however long it would take. So we headed out of town. I described my hotel to him. On the coast, with a garden, orange trees all around, nuns live in it…he said “that describes almost every hotel in Sorrento”. I was very lucky that my driver Rafael spoke english really well. We had a lot of laughs and even flirted a bit. We drove all around Sorrento and I think even Napoli. It was adventurous, hilarious and only a little worrisome. Eventually I saw a few things that triggered my memory and I was able to guide us to my hotel! Once we found it he offered to keep me out and show me more of the town… after assuring him my night was over Rafael invited me to brunch tomorrow with his family. He said they needed to meet the giggling American. It was a crazy night that I’ll never forget. I’ve never felt so brave or alive. Italy is an amazing, friendly, beautiful place full of life and culture. I can’t believe my luck and blessing to be able to celebrate the new year here. 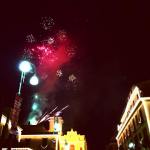 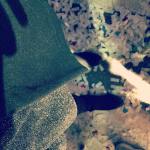