For my sister in law Ashley’s birthday we decided to go on a girls trip to Universal Studios Florida! I found an awesome Living Social deal on a hotel and bought tickets using credit card miles. Then used our Military ID’s to get a really good deal on Park tickets. Where did we stay? Sonsol Hotel Accommodations: Fantastic. The hotel had just been remodeled. Everything was very clean, new and modern. Our room was great. The pool area was really nice, although it rained most of our trip and didn’t get to swim. Breakfast kind of lacked, but that was okay. Location: Close to the major parks, but you have to take a taxi ($10 to the park)

Day 1 Since we were spending three days at Universal we decided to go to Islands of Adventure first AKA Harry Potter World. That way we could go again on the third day. We were in the park on a really off weekend in February. So there were basically no crowds. It was great! We did every thing possible at Islands of Adventure. We had to wait for nothing. There were no lines! We had been pre-warned that Harry Potter World would be insanely packed. But because it was the middle of February, a week day and  a little rainy. It was empty. I rode the new coaster twice without waiting! I did lose Ashley for about half an hour. Which was scary. I didn’t have my phone and because it was raining everyone was wearing the same plastic rain ponchos. Eventually we made it back to each other only a little shaken up. 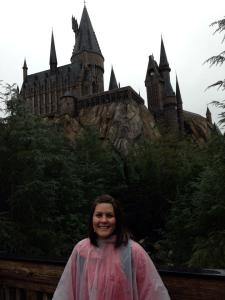